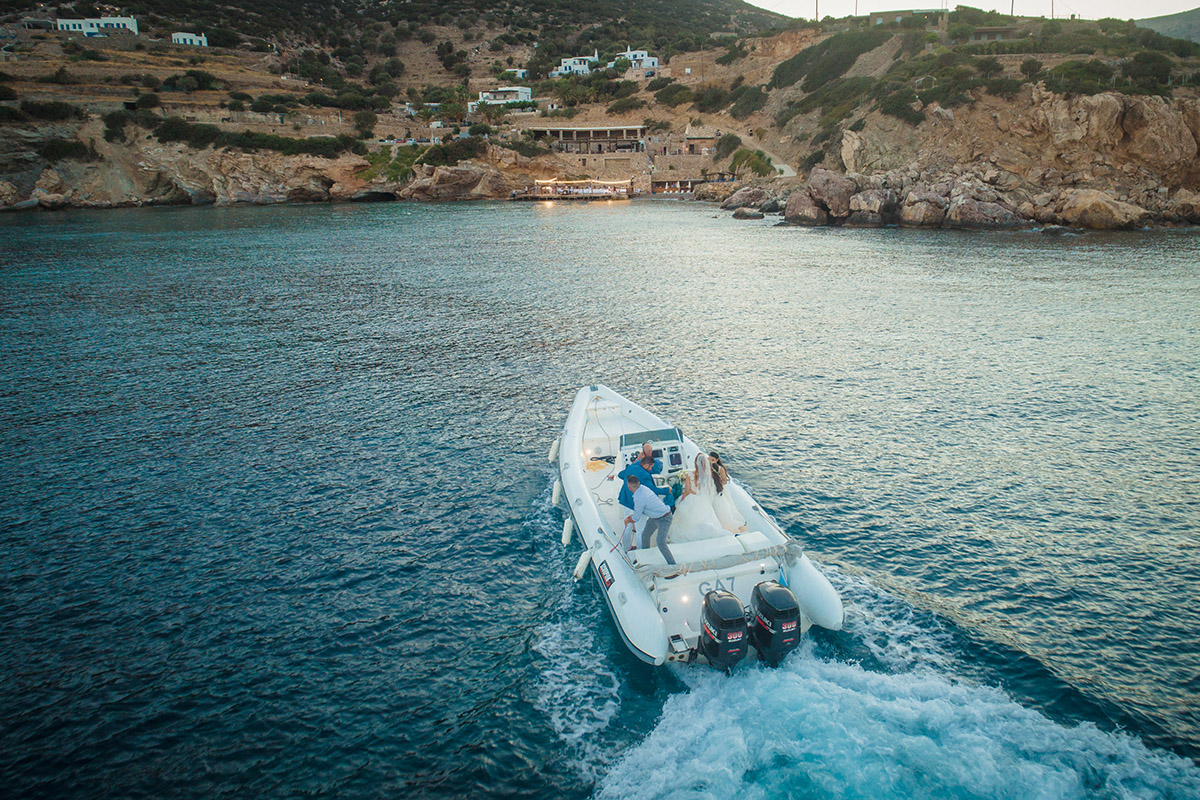 Posted at 14:19h in WEDDING STORIES by XefragoAdmin 0 Comments
0 Likes

The story that follows not only is based on real facts but the people involved in it are also 100% real! What you shall read is the mere truth and those participating are real and live among us!

Yannis launches his RIB in the sea, takes Spyridoula and sets off to the beautiful coasts of Sifnos for a quick trip.

It is noon and they sail towards the beach of Platys Gialos. They leave behind them Panagia Chrysopigi and cross the gulf where Lazarou Beach is, a wonderful restaurant-bar literally in the water.

They watch the enchanting scenery. Suddenly thye hear live music coming from the small beach. On a platform, there is a band that checks the sound for the wedding party that is about to start.

They listen to the violin, the lute, the guitar. The singer rehearses a song that touches Yannis’s heart.

“Ten years have gone by, my eyes, oh my eyes,

the girl has grown into a woman, yet I’m still a child”

They stay there and listen to them for a long time.

Then, at some time, Spyridoula turns to Yannis and tells him: “It’s so beautiful here, my love. This is how I would like my wedding”

Yannis is recording a video, yet he keeps the words of his beloved in his mind. He tells her in a rather indifferent way, “yes, it is lovely here”, but he has already started planning the “perfect robbery”.

Spyridoula, dressed in white, walks the steps of the northern part of the hill that lead to the white church of Panagia Chrisopigi. The groom’s RIB has left her in the small port, after having made the necessary maneouvres! 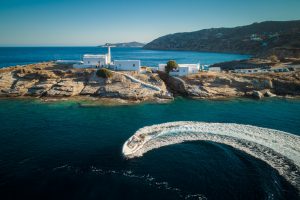 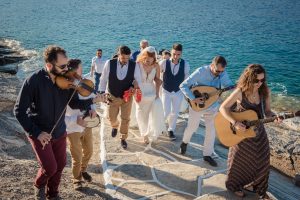 Yannis, deeply moved, takes Spyridoula by the hand and the ceremony begins. 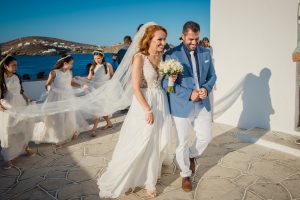 A simple majesty in the middle of the deep blue of the Aegean Sea!

A wild party followed at Lazarou Beach until the sunrise. The guests were just a small punch of people. Those who could fit on the RIBs and those who were in time. The tables were set one next to the other, the guests ate and started dancing. 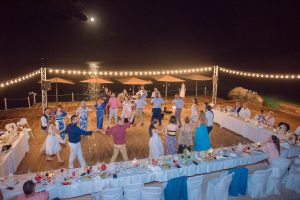 Xefrago Ambeli, always ready and “of all weathers”, make their best. We started with circle dances. The guests, holding their hands or arms, seem to dance on the sea.

The broom leads the dance and smiles. The “plan” has succeeded. 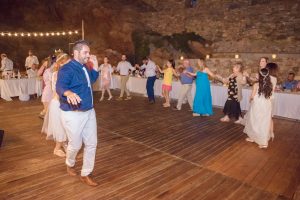 After the wine, that is abundant, there comes whisky. Zeibekiko and Antikristos follow. 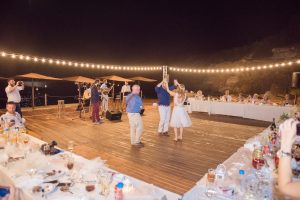 Time goes by and the moon shines on the flushed faces. The day rises. Those having young children are about to leave. Some others lie on the beach. On the pebbles, they stare at the slow changes of light. Xefrago Ambeli farewells them with a dynamic closing.

“Yanni, SPyridoula we wish your life to be like this day. A real wild party!”

Two hours later the sun has risen. The island starts to find it rhythms. We meet Yannis at Platy Gialos, who expects us with his best man. “Goodmorning, guys. Everything ok?” the broom asks.

“Ready for everything” we would like to answer, yet we are still dreaming.

“We are lucky”, says the bestman. “the sea is quiet. In less than two hours we will be in Kythnos”

And so it is. Sotiris and Kyriaki expect us there. They are getting married at Panagia Kanala at noon.

From an unforgettable experience to another and meanwhile, we ride the waves, with this incredible groom that made his best to have us in his joy. 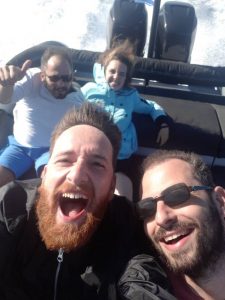 What followed is another story that you shall read in a while.

In September we met again with the couple.

We had plenty of time so Yannis told us his story in details: Ten days before the wedding, they invited their beloved and there he proposed to SPyridoula. He gave her a ring and, once she said yes, he gave her the wedding dress. He told Costas and Natasa that they would be their best man and best woman and that the wedding would take place in two weeks in Siphnos. He also told us that everyone had thought he joked, since he had everything settled. Two days before the wedding, 40 people got onto RIBs and came to Siphnos. You know what followed. At some time Yannis takes his mobile and says:

“Guys, I have a video taken from my RIB a year before, when we had sailed to Platys Gialos with Spyridoula and listened to a great band playing at Lazarou restaurant. This is where everything started” He shows us his mobile. We were astonished. “You are kidding, Yannis” we said.

“This is us”, we said. “This is us rehearsing for a wedding” We looked at each other. It was obvious that all this was meant to be.