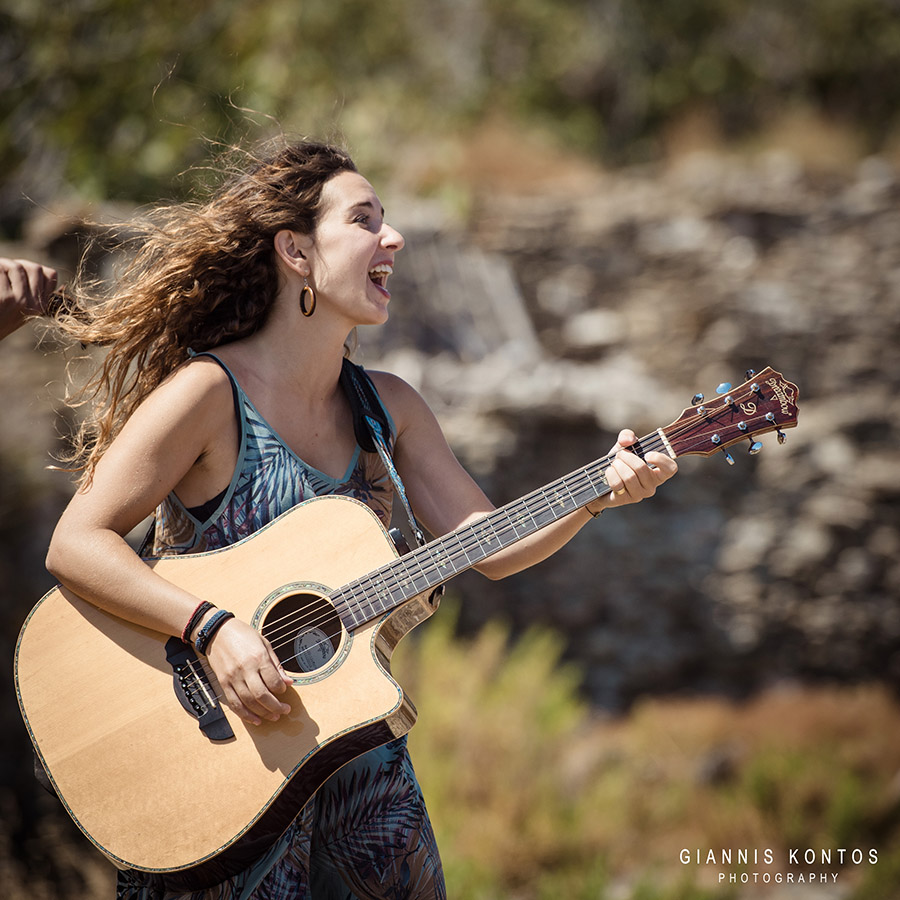 ANTIGONE: She was born and grew up at Penteli, Attica. As a kid, she used to play the piano. Soon, she discovered the guitar and singing and created her first music band (Carbonated Lemonade), where she composed music and sang in English. She studied Physics in the Kapodistrian University of Athens, playing meanwhile music in music theaters in Athens. She has attended courses and seminars of vocals, traditional song, folk and modern guitar as well as of lute. She used to be member of the polyphonic choral band Τerra Voce and is still member of the Encardia Band, where she plays and sings songs from South Italy, mainly in performances for children. All these gave her the chance to travel in different places around the world for concerts and seminars. She took her master’s degree in Ethnomusicology, focusing on traditional singing. Ever since Xefrago Ambeli’s birth, the band has played a featured role in the so far Antigoni’s musical journey, and has also been the main reason why she ever came in contact with the musical tradition of Greek islands. She likes experimenting with different kinds of music. She loves travelling, feasting and using her i-pad. 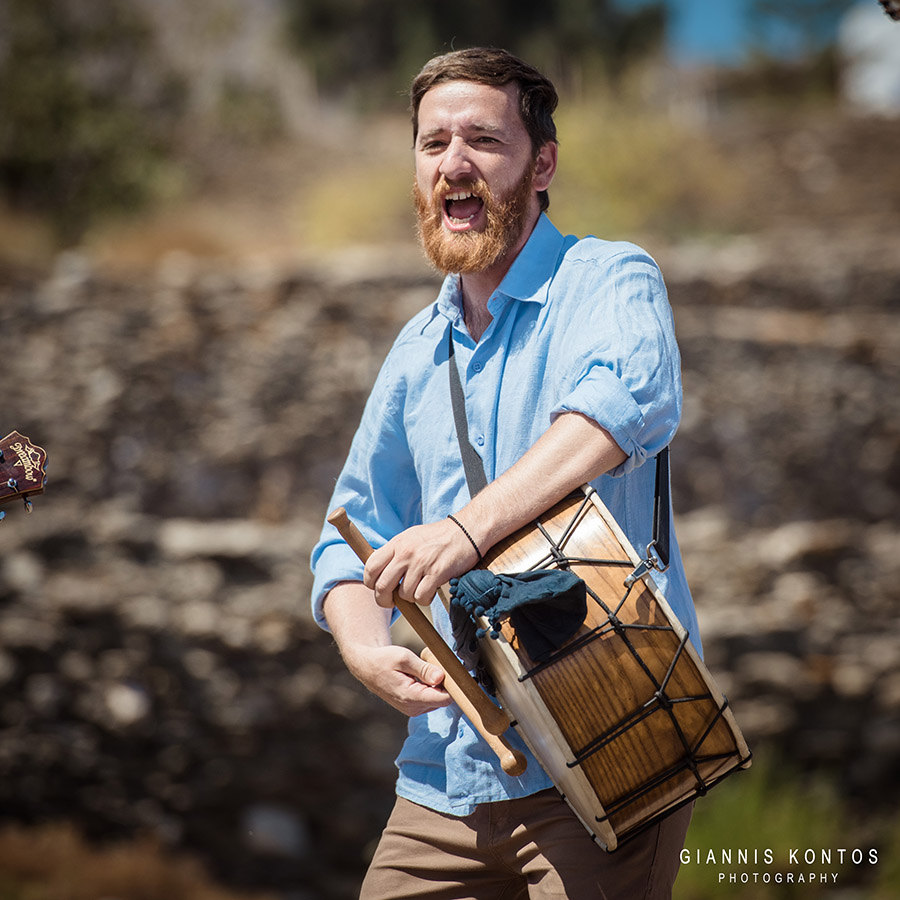 MANOLIS: Ηe was born and grew up in Athens. Feasts have been part of his daily life since his early years, as he is member of a family with many children where music has been part and parcel. While in primary school, he was taught the Cretan lyre by Manos Pyrobolakes at the school of traditional music of the church of Agios Athanassios in Polydroso and later on, he studied byzantine music at the Athens Conservatorium (Lazaros Kouzinopoulos was his teacher). He studied traditional music at the Department of Traditional Music of the Technological Educational Institute of Epirus. It was there that he came in touch with the traditional brass instruments as well as with the ney. He likes singing, composing his own verses, telling stories loudly and being constantly in high spirits. He loves teasing both friends and strangers, drinking good wine and tsipouro! SPYROS: He was born and grew up in Sifnos Island. His first steps in music were taken at the local conservatory while still very young and involved classical music. As a teenager, he met and loved the violin in the family feasts and local dances, so he devoted himself to the study of traditional music. He studied the violin next to old local violinists and on his own and he kept studying during his university years in Athens. Meanwhile, he broadened his knowledge in traditional music next to well-known teachers. He studied Physical Education, focusing on traditional dances, a field he still works at, as he owns a Dance school back to Sifnos. At the same time, he teaches the violin at the local conservatory, where he had made his first steps. During the feasts of Xefrago Ambeli, he enjoys playing incessantly among the dancers. When he doesn’t play, he dances his heart out! He enjoys good company, fine mezes bites as well as teasing his friends. 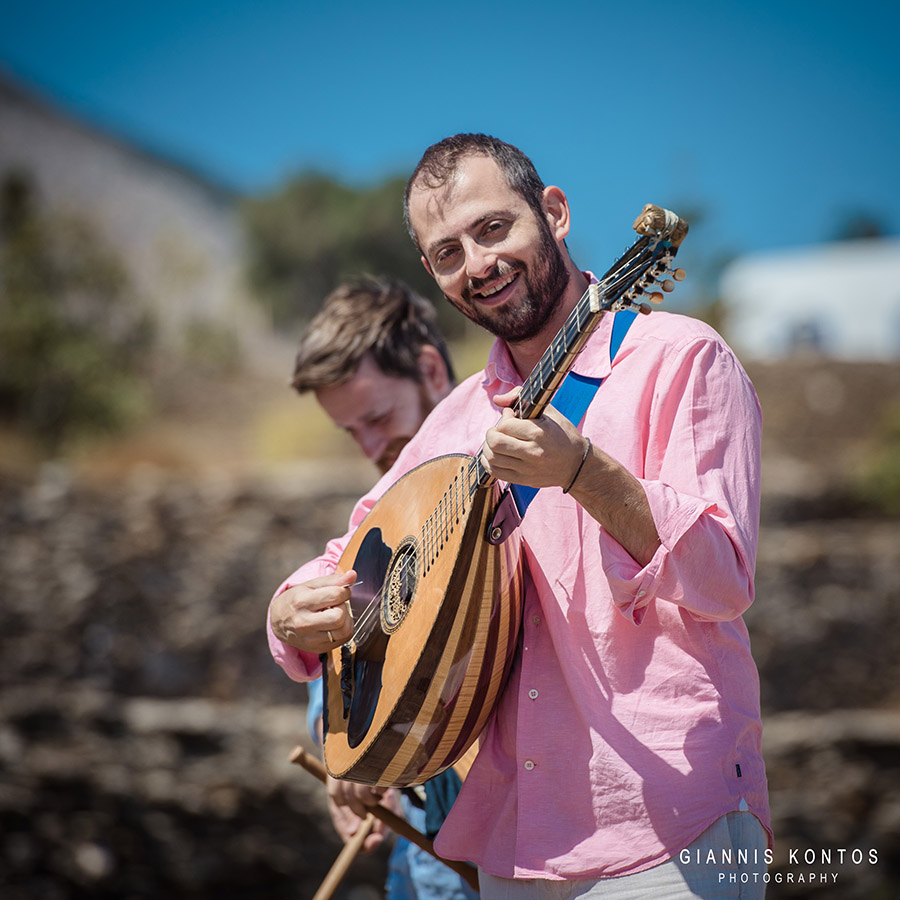 GREGORIS: Gregoris Lebesis was born, grew up and still lives at the traditional settlement of Artemonas in Sifnos Island. He had his first music spurs as a baby, since traditional dances are part and parcel of the island. While at school, he started studying classical music. But he was soon drifted by traditional melodies and he started playing the lute. Along with his brother Spyros they formed a group, a “takimi” as they say, and started playing in local events, weddings and feasts. Later on, he studied economics and sought new spurs taking lessons next to well- known players of lute. He likes composing his own melodies, singing in high spirits and settling pendant tasks. He loves organization, technology and sound recording. In Xefrago Ambeli he is in his element He plays the lute and is in charge of sound checking and the accounting of the band.